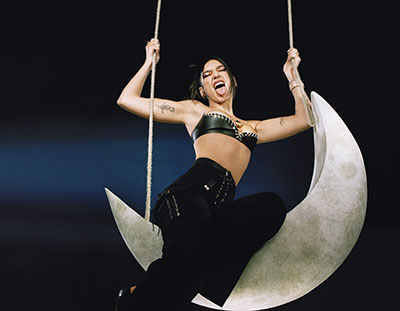 A new city festival LOVESTREAM Bratislava has a lot to offer you, do not miss any day of the festival. On June 11, you can be looking forward to a great music event of the most played British singer, DUA LIPA.

Dua Lipa grabbed attention for the first time with the song Be the One in 2015. After were coming singles such as Last Dance, Hotter than Hell and Blow Your Mind (Mwah). The next hit has changed her life. With the single New Rules, she became the youngest solo musician with more than 1 billion streams on YouTube.

The British girl with Kosovar-Albanian roots has become at once the desired megastar. The biggest stars of the music industry have shown an interest to work with her. She performed in Sean Paul’s, Martin Garrix’s or Calvin Harris’s recordings. You can find a duet with Chris Martin from Coldplay on her eponym debut album.

In 2018 she was the first artist nominated five times at Brit Award and got two awards for the Best British Female Solo Artist and The British Breakthrough Act. 61st Annual Grammy Awards brought her two awards for the Best New Artist and the Best Dance Recording for her duet song Electricity in collaboration with Silk City. Even before bringing out the album Future Nostalgia, at the end of 2019, Dua Lipa introduced her No. 1 hit Don’t Start Now on the stages of MTV EMA, ARIA and AMA. Releasing the album brought her 5th nomination at the 63rd Grammy Awards and one more award for The Best Pop Vocal Album. The album Future Nostalgia reached more than 294 million streams in the first week, and she surpassed more than 6 billion streams for all tracks. Regarding Spotify, Dua Lipa holds the record for the most-streamed British singer album in one day, and she is the most played British artist.

Now you may enjoy her concert show with all the hits at LOVESTREAM festival.